It is placed on the medieval tower emplacement, testimony of Lalín birth. Nowadays, is one of main squares. The author, applying the innovations of European postcubism, works with a defined method where simplification prevails. The author use geometric volumes outlining them, just as pure architectural structures but also with the vital force of expressionism.

Monument is conceived by admirable clarity, with regular granitic blocks and a simple metal crown, with two bronze words as only decoration.

In the wings, with great expressionist force, allegoric figures of Spain and The Philippines appear, with flight attitude. Both shake hands under the name and figure of the aviator, as a symbol of the alliance obtained in 1926 with the prodigious "raid" Madrid – Manila, realized by “Loriga”  with  the Company of Gallarza and Estévez.

In front of the tail of plane, located vertically in land, the statue of aviator is with his helmet, and, emphasizing again on the ideas of austerity and moderation, sculptor changes the military uniform into mechanic´s one and he accommodates hands on propeller, as well as he supports a parchment.

Face and left hand are bronze. The cleanliness of lines is palpable in the right silhouette of the landed plane, suggesting a cross form. The idea of cross is reinforced in the simple placement of the pilot image as opposed to both flying figures.

The monument shows a very symmetrically scheme that makes it look very static. 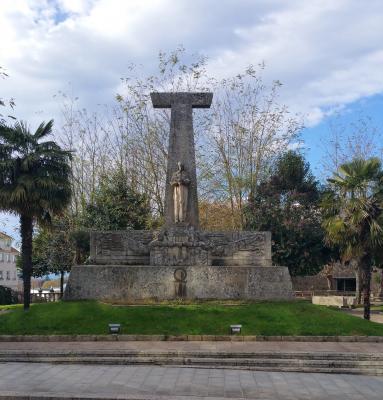