This baroque manor house of century XVII was Taboada´s house, one of the most important Galician family.
It was occupied until the beginning of 20th century, but the season of greatest glory was on 19th century, when prominent people spent seasons in it. The manor house was introduced in the literature by Ramón Cabanillas, Otero Pedrayo and Emilia Pardo Bazán. Here, Joaquín Loriga Taboada was born and baptized.
The last Taboada had to leave the manor house and moving Santiago on 1920. From here properties were changed until construction was become deteriorated. Lalin council bought it to save it and preserve it as a local historic reference, on 2002. It was declared BIC (Cultural Interest Property), like historic monument, on 2009. The renovation works began in collaboration of  Development Ministry, Culture Counsel and Pontevedra´s Deputation, on 2011. Manor house official inauguration for public enjoyment had made on 2014, like a great hub for culture and architectural reference of Deza´s region.
The manor house make up of principal building and two added, on the one hand, the chapel and the workshop, on the other hand, the oven and the shed; with the stone wall around.
On the principal building, balcony behind of building, the kitchen inside and Churruchaos, López de Lemos and Taboada´s coat of arms in front of building stand out for its beauty.
It harbours the Archaeological Knowledge Management Center, linked to Pontevedra´s Provincial Museum, which count with exposition area for discoveries and treatment and cataloguing laboratory.
Puppets Galician Museum is on it and is the only one of this theme. It has two puppets exposition areas and one of the most completely specialised library of Spain.
Loriga´s Area is a place which is dedicated to the memory of Joaquín Loriga Taboada, Lalin´s distinguished son, born in this manor house and great reference to Spanish aviation. One of the most important landmark of his career is the Madrid-Manila raid on 1926 with Esteve and Gallarza. All make up the Elcano Patrol.
Furthermore there are multifunctional areas like the old noble living room, where are standing out the  restored paintings and the coats of arms on the ceiling and where are celebrated different cultural events like musical shows, theatre, conference, temporal exhibition, ... 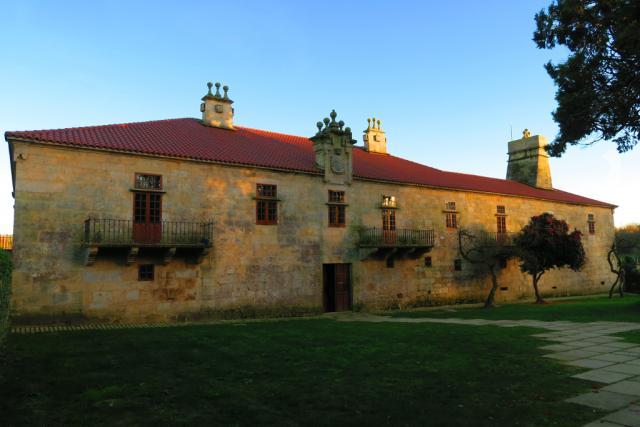